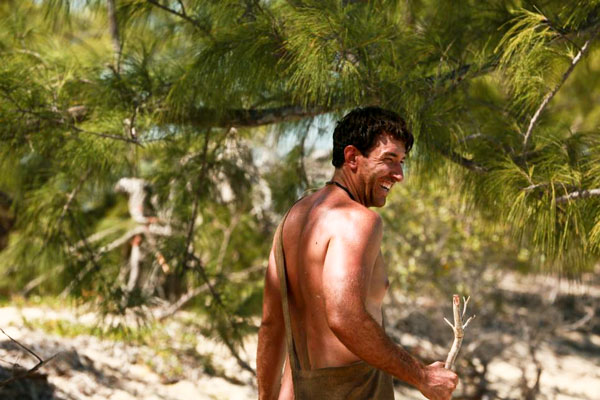 The date is February 14, 2020. I am holding on to a rough and tattered fisherman’s rope as I bounce ferociously across the choppy sea. I am the guest aboard a local captain’s small and dangerously old fishing vessel. As we ride off into the open ocean and venture further and further from the coastline, I find myself once again questioning my risky decision making. After nearly an hour jetting out to sea, all land has disappeared with the exception of a small, distant and featureless patch of sand that’s becoming closer with time. This small and desolate island will become my home for the next 14 days. With the smell of salt in the air and the warm sun on my white pasty skin, it almost feels like the beginning of a much-needed vacation. And as quickly as that thought materializes, it vanishes when my camera man suddenly proclaims, “it’s time to lose the clothes!”

My name is Jeff Zausch and many of you may know me from my numerous appearances on the Discovery Channel, particularly as a successful survivalist on the show Naked And Afraid. This past February, before I fully understood how 2020 would prove to be so challenging for us all, I agreed to once again strip myself of my clothing and all modern conveniences and attempt a new Naked And Afraid challenge like no other. Having already survived more days Naked And Afraid than any other man, I began this challenge confident and eager to once again test my limits. That was until I learned that I was going to be placed on a small, unnamed island in the middle of the Bermuda Triangle that happens to be surrounded by one of the world’s largest shark populations.

The goal is simply stated, to survive 14 days in this deadly environment with no clothes, no food, and no water. I was granted 1 item of my choosing, which for me was a fairly simple choice. I knew that my item was going to be a knife, but that’s where the simplicity ended and the ever-impossible decision of selecting a knife began. There are hundreds of knife companies in the world with many thousands of potential options, so what knife do you choose when literally trusting it with your life on a deserted island? For me it was proving impossible to choose the knife based solely on reading reviews and zooming in on digital images, so I chose another route. Instead of researching the knives themselves; which all have uplifting and braggadocios text descriptions, I would instead research the actual knife designer, the architect himself. This strategy ultimately led me to Oliver and Christopher Hannan at SLYSTEEL.

SLYSTEEL prides itself on designing a blade that does more than the eye can see. The Hannan’s believe that a true blade should be designed with numerous uses in mind, even ones that may seem “unlikely” to be used by the average user. So, as I was skipping across the open sea on my way to survive naked on a small island in the Bermuda Triangle and surrounded by sharks, the idea of possibly encountering “unlikely” situations seemed rather likely. And for this reason, I wanted a blade that was designed with intelligence and forethought, I wanted a blade that knew what it could do even if I did not. I needed a blade that was prepared for anything that I or mother nature could throw at it, and for this reason, I chose the SLYSTEEL Survival Kukri as my sole survival item.

Fourteen days on an island in the Bermuda Triangle may not seem like a lot to most people, especially after watching me successfully survive a Philippine jungle environment for 60 consecutive days, but I promise you, this small, desolate island was no slouch. During the 14 days spent living off the land, I experienced dangerous storms, life-threatening seas, plague level numbers of sand fleas, and much more. To say the SLYSTEEL Survival Kukri helped me survive out there would be a vast understatement. In fact, this blade is what ultimately saved the challenge for myself and my four incredible teammates.

A Multitude of Tasks

From sunup to sundown, this kukri was in my hands. Creating, building, chopping, hunting, fishing, digging, and all the other tasks that come with wilderness survival, this blade did them all. It would be impossible to go through the extensive list of everything that this blade did for me out there, but below I will detail 2 of the more memorable moments I had with the SLYSTEEL Survival Kukri.

“Guts so good” – My challenge began abruptly when I was forced to jump off the “small and dangerously old” fishing boat and swim through shark infested waters to ultimately arrive on my barren, no-name island. When I crawled myself up on shore the first thing I did was scout the area for resources and get an idea for what I was in for.

The Island lacked any hardwood trees of considerable size, which I knew would make shelter building extremely difficult. There was no source of running fresh water, only the remnants of rainwater that had collected in deep limestone troughs that had formed from thousands of years of wind and water erosion. And while scouring the interior of the small island, searching for dry tinder for a much-needed fire to purify some drinking water, I finally spotted the first potential protein source, lizards!

The lizards were everywhere, it was truly a beautiful sight to behold. Watching the lizards run hastily across the limestone, diving into holes, popping up out of new ones, it looked like a chaotic day of recess dating back to my days in elementary school. Although beautiful, I knew these lizards were going to be a primary food resource for me during my time on the island. Finding them was one thing, catching them was going to be another.

After countless cut knees and scraped shins, I finally learned how to corner the little buggers and snatch them barehanded, eventually ending the struggle with a quick biting off of their heads. On day 3, I had managed to secure a grand feast of 9 lizards! But before the feast could begin I had to field dress and prep them for cooking. In a normal situation, the knife choice for this task would be anything but difficult, requiring just a small blade approximately 3 inches long, small enough to control easily with a single hand and small enough for the fine detail work of slicing open the lizards belly and disposing of the innards. But I didn’t have that choice, I had in fact already made it, and sitting next to me was the 16-inch-long SLYSTEEL Survival Kukri.

Most knives of this size would prove too bulky to handle such a delicate task, but it’s at this moment that I was grateful I brought a blade that was designed to excel in the most “unlikely” of situations. If any situation qualified as unlikely, it would surely be kneeling naked on a deserted island while trying to gut and process 9 lizards for an epic survival feast.

The SLYSTEEL Survival Kukri performed marvelously well! While slicing open the lizard bellies, I took full use of the choked-up finger grip, an area of the knife that actually provides for finger placement at the very base of the blade, giving superior control and allowing for fine dexterous movements of the blade. This allowed for the versatility and the fine detail work that would normally be expected from a much smaller blade, however this time it was being done with a 16-inch Survival Kukri whose large size was surely going to be useful down the road when it came to building and chopping. Truly the best of both worlds!

“Don’t look down” – After the first week on the island it became apparent that our primary food sources were fish from the sea or lizards from the land, however an all meat diet for weeks on end will almost surely do a number on your digestive system, it was paramount that we find a good source of fiber and do it quickly.

The island was scarce when it came to large hardwood trees, but a small section of land near the beach was home to approximately 8 coconut palms which were about 35 feet tall. The delicately hung coconuts had been staring at us for 7 straight days while we drank stagnant rain water and constipated ourselves from eating lizard feasts every night.

Coconut water and the delicious meat inside can act as a natural laxative and are also great sources of fiber, carbs and several important vitamins. These coconuts were going to be critical, but they were all 35 feet up in the air and impossible to reach. The simple solution would be to cut down the entire tree and harvest everything we could, but we didn’t want to devastate this island for years to come, especially knowing that it takes over 20 years for a coconut tree to reach its peak coconut production. There had to be another way. And then I remembered how two years earlier when I was surviving on an island in the Philippines, I had seen a very old grove of coconut trees, they must’ve been over 75 years old, and they all had little notches carved into them, going from the bottom all the way to the top. I surmised that these notches had been carved many years earlier by local inhabitants, allowing them to climb to the tops of the trees to harvest the coconuts without harming the tree itself. Having never done this before, I wasn’t overly confident in the result, but for what I may have lacked in confidence, the SLYSTEEL Survival Kukri more than made up for.

The Kukri chopped through that thick outer palm bark like butter, giving us a fighting chance and allowing us to keep the tree alive. The task was very physically demanding and not for those afraid of heights, standing 30 feet up in the air, resting one foot in the highest chopped notch while suspending the other foot in mid-air, all while chopping the next foot hold so that I could move another couple of feet up the tree. The process was repeated until 17 footholds were carved into the side of the tree. This allowed us to climb the tree and chop down all 23 coconuts that were at the top. With carefully constructed strategy and a blade worthy of survival, we scored a food stash that would last us until our final day on the island. The coconuts provided much needed nutrients, fiber and the most delicious coconut water ever tasted by man.

Seeking out the Knife Architects

Even far before the conclusion of the challenge, I was absolutely certain that I had chosen the right survival item for me and the right blade for this challenge. Throughout the 14-day challenge the SLYSTEEL Survival Kukri killed and processed one octopus, harvested 19 conchs, gutted 17 lizards and 29 fish, it carved paddles out of drift wood, built shelters from palm, dug out hibernating crabs from underground, and even cut the anchor rope that was dragging our dingy into the depths of the sea, potentially saving our lives (a story for another time).

My time in the Bermuda Triangle taught me that when searching for the perfect knife for you and your task at hand, it’s best to seek out the architects who designed that knife, only then will you find your knife’s true potential and only then will she find her true destiny. Thank you to Oliver and Christopher Hannan at SLYSTEEL for designing a blade worthy of my adventures. Until next time!

Since 2013, SLYSTEEL has been guided by "the edge of innovation" and continues to live that mantra by designing and manufacturing unique knives that serve their owner in the most demanding circumstances without failure.